Hatice Cengiz is a Turkish academic and researcher in middle Eastern studies, and has published academic articles and a book on Gulf Countries. She is the partner of slain Washington Post editorialist Jamal Khashoggi, who was murdered inside the Saudi Consulate in Istanbul in 2018. Since that day, Hatice has campaigned for truth and justice in the killing of her fiancée, and for the international community to hold accountable those who ordered and planned the killing. She has testified her campaign to the United Nations Human Rights Council, the European Parliament, the US Congress, and various other national parliaments. Hatice has studied and lived in Egypt, Oman, Jordan and the United Kingdom. 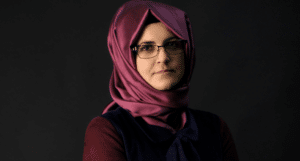