Wa Lone is a journalist, currently working for Reuters in Toronto bureau, Canada. He has covered a range of in-depth stories in Myanmar, including land grabs by the military and the murder of prominent lawyer Ko Ni, as well as uncovering evidence of killings by soldiers in the country’s northeast. His reporting on the ethnic cleansing of Rohingya Muslims in 2017 won him and his colleagues several journalism awards including the Pulitzer Prize in international reporting.
During his reporting on the Rohingya, he and a colleague were arrested on December 12, 2017 by Myanmar police and sentenced in September 2018 to seven years in prison on Official Secrets Act charges. Thet Oo Maung was freed in May 2019 in a presidential amnesty.

In 2017, Wa Lone, a journalist in Myanmar for Reuters, was arrested with his colleague Kyaw Soe Oo while reporting on military abuses of the Rohingya people in Rakhine State. Their ordeal included eighteen months in prison; for their investigation, they were awarded the Pulitzer Prize for International Reporting in 2019. 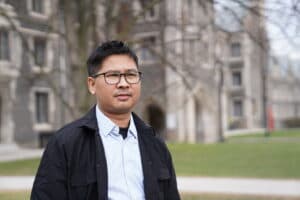