Seymour Hersh is an American investigative journalist and political writer. He is a longtime contributor to The New Yorker on national security matters and has also written for the London Review of Books since 2013.

Hersh first gained recognition in 1969 for exposing the My Lai Massacre and its cover-up during the Vietnam War, for which he received the 1970 Pulitzer Prize for International Reporting. During the 1970s, Hersh covered the Watergate scandal for The New York Times and revealed the clandestine bombing of Cambodia. In 2004, he reported on the U.S. military’s mistreatment of detainees at Abu Ghraib prison. He has also won two National Magazine Awards and five George Polk Awards. In 2004, he received the George Orwell Award.

In recent years, Hersh has accused the Obama administration of lying about the death of Osama bin Laden and disputed the claim that the Assad regime used chemical weapons on civilians in the Syrian Civil War. Both assertions have stirred controversy.

Seymour Hersh is a long-time staff writer at The New Yorker, and author of Reporter: A Memoir. From his reports on the massacre at My Lai, to his exposure of the horrors of Abu Ghraib, to his attempts to get to the bottom of the circumstances of Osama Bin Laden’s death and the conflict in Syria, Seymour Hersh has over five decades made a reputation as one of the world’s most acclaimed investigative journalists. 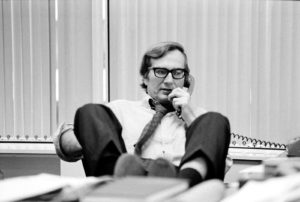