The Open Lab is a new initiative from the CIJ Logan Symposium to promote work at the intersection of investigative journalism and the arts.

Over the course of the symposium you can watch a new commission from filmmakers Kevin B. Lee and Chloé Galibert-Laîné, explore painter Navine G. Khan Dossos’s new work “No Such Organisation”, utilise our new [re]source database that has started to map out the people, projects and organisations experimenting with artistic investigations, as well as take part in Fast Familiar’s interactive thriller, Smoking Gun and more. 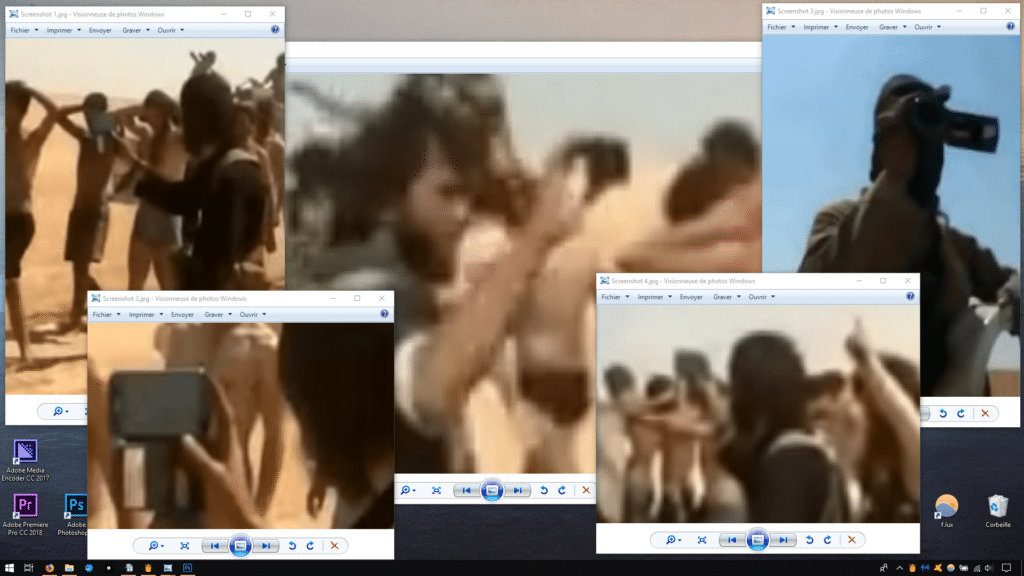 Bottled Songs is an ongoing media project depicting strategies for making sense of online terrorist propaganda. Filmmakers and media researchers Chloé Galibert-Laîné and Kevin B. Lee compose letters addressed to each other, narrating their encounters with videos originating from the terrorist group the Islamic State (ISIS). They use a desktop documentary approach to trace and record their investigations playing directly upon their computer screens.

This screening presents four chapters from the project. “The Observer” and “Looking Into the Flames” delve deep into the details of individual ISIS videos. “My Crush was a Superstar” and The Spokesman” explore the lives of individuals who appear in the videos.

Bottled Songs will be screened as part of our programme in November, we’ll be posting details of how to watch the project shortly.

No Such Organisation (2018-2020) is a series of one hundred paintings that document the fallout from a single event: the killing of Saudi dissident Jamal Khashoggi in 2018. This cycle of paintings follows the repercussions of this event in real time, through the news articles and the investigations it triggered, confronting the development of cyber weapons and spyware, and the ways in which they have compromised the safety and working conditions of journalists, activists and political dissidents throughout the world.

The reporting of the death of Khashoggi changed radically during the first days and weeks following the event; a kaleidoscope of tumbling details constantly re-arranging themselves, a story that never quite settled, in facts, or in responsibility. The paintings respond to this uncertainty by deploying symbolic elements which stand in for players in the story – nation states, agencies, technologies, and – which shift, recompose, and come into new alignments with each retelling of the story.

Significantly, the case remains without a central visual figure, as the body of Khashoggi was never recovered, while sound and silence played a key role in the case, as a recording from the Saudi Embassy in Istanbul circulated in the media. Into this absence of images, Khan-Dossos inscribes a hundred tracings of the event.

As the narrative of the killing expanded over the subsequent months, so the subjects of the paintings branch out to cover wider issues raised by this case, in particular the role of surveillance technologies sold by private companies to governments for domestic and international use in matters of security and intelligence, with little oversight. However, a critical stance is now developing around the ethics of such tools of surveillance, and the paintings explore these changes in awareness, campaigning and attitudes towards the role of cyber weapons in global politics.

*We had planned on showing a selection of paintings from “No Such Organisation” as part of our live event in Paris, but the pandemic presented us with the challenge of working out how to show the paintings to an online audience. Over the past 6 months we’ve worked with Navine to produce a website that archives the full cycle of one hundred paintings and the stories that inspired them, and let’s you navigate the works in a variety of different ways. From November you’ll be able to see the paintings and read the stories that track the shady dealings of NSO group.