An introduction from the author, Raj Bairoliya

A little history is in order. A dozen or so years ago, I was complaining to my friend Michael Gillard about the standard of financial investigative journalism in the UK – it was a matter of serious concern to me as I make my living from investigating wrongdoing. If journalists aren’t exposing wrongdoing, I can’t be investigating it. Michael suggested that rather than complaining, I should do something. This developed into a course specially designed for journalists and researchers provided by the Centre for Investigative Journalism (CIJ). We have now been presenting it for 11 years, together with a number of intensive weekend courses. I am often asked if there is a suitable book aimed at investigative journalists – I am not aware of one. So this is the result.

This guide is definitely not for anyone who knows anything about accounting and the world of finance. It is aimed at complete beginners. If you are an experienced financial journalist, or worse still, an accountant, you are unlikely to derive any benefit. By necessity I shall present many complex ideas in a simple and non-technical manner. Like any profession, accountancy has its fair share of jargon and unnecessarily complex terminology. However, unlike medicine, it uses many common sounding words that often have a very technical meaning.

So who is this guide for? It is primarily for investigative journalists, but also those who need to make sense of a set of company accounts or to obtain an overview of a business in order to ask “on-the-money” questions. To do this at an expert level is difficult, if not impossible, without years of specialist training and experience. However, I want to persuade you that it is relatively straightforward to obtain enough of a working knowledge to know what questions to ask about a company and its accounts, and to know when the wool is being pulled over your eyes by the answers.

What are those questions? It depends on why you are looking at the company and its accounts. Nobody, not even accountants, pick up a set of accounts other than for a very good reason. Is the company in the news? Is it an important local employer? Has it won a big contract? Do the directors have political connections? Are there questions being raised about its activities? Is the company making claims that raise questions as to its credibility? Are there a number of related companies forming part of a complex web? Despite being wildly successful, does it pay little or no tax?

In all of these cases the questions include whether the company is making a profit or loss, has more assets than liabilities and is generating cash. What is revealed by the small print in the accounts, what is hiding behind the numbers, and who is in charge?

This book will seek to demystify company accounts so that you should be able to answer all of these questions and find out where the real story is in a set of company accounts, even if they run into hundreds of pages, without drowning in the detail. Swimming in it, but hopefully not drowning!

I will deal essentially with company accounts as produced by UK registered companies or those quoted on the London Stock Exchange (LSE) – companies that play by the rules set down by the Companies Act 2006, the LSE listing requirements and UK accountancy regulator’s UKGAAP (Generally Accepted Accounting Principles). Company accounts around the world are produced in a similar fashion, so once you understand a set of UK company accounts you can apply that understanding to foreign company accounts. Many accounting concepts and presentations are universal. Only the amount of disclosure may differ.

I will also concentrate on trading companies rather than banks, insurance or investment companies and mining or oil companies. The accounts of these types of companies are in many ways similar to those of trading companies that make or sell goods or services. But there are certain essential differences and complexities for which a journalist would need to seek specialist advice from those knowledgeable about that particular industry, such as investment analysts or commentators.

So what skills do you need?

You will need some appreciation for commerce – how simple businesses such as a corner shop or a market trader work.

You certainly don’t need to be a mathematician or statistician. As you will see later, accounting is mainly about words and often a little sleight of hand– something most journalists are good at! But you will need to be comfortable with numbers and not glaze over when they appear. Numbers are like a foreign language. It is difficult to start but the more conversant you become, the easier they become.

This is not “company accounts for dummies”. Journalists should be better than that. It is not simple. There is no easy way. However, it can be done.

I hope this guide is indeed helpful in demystifying company accounts. If you have any comments or suggestions you are welcome to email me at the address below.

A number of people have contributed extensively to this guide becoming a reality rather than just remaining an unanswered request from journalists attending my courses. I am particularly indebted to Michael Gillard for helping to make it happen. Many thanks to Minal Da Gama Rose for ensuring that everything was on track and ready in time for the CIJ Summer School. Finally, thanks too to friends and family who have read drafts and offered corrections and suggestions.

Was it foolish for a man of numbers to offer words of wisdom to masters of words? Time will tell. 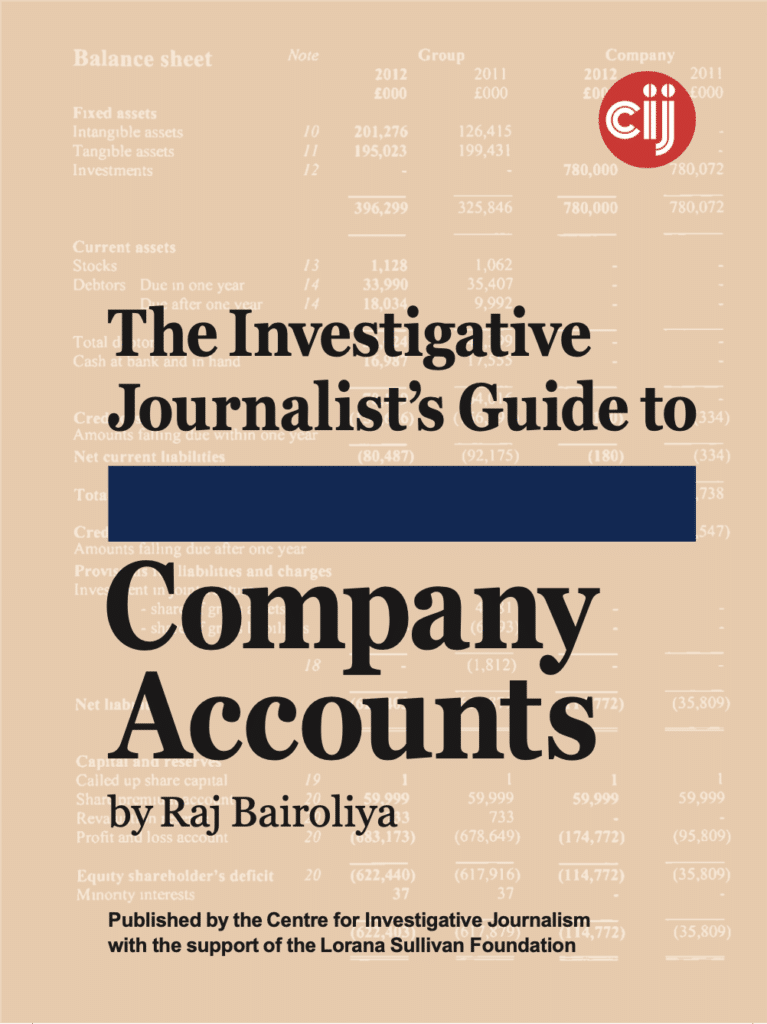