Gabriela Löffel (CH 1972) works with time-based media, focusing on fields such as politics and economics. She observes the structures that govern the representation of realities, which could be called a space of mediation.

Fragmenting, translating and shifting from the document, the immediate, to interpretation and “mise-en-scène” are strategies that she uses in her creative process. A processing in which the spoken language takes an important role.

Her multi-channel video installations have been shown in North America, Asia and Europe, she has received various awards, such as the Swiss Art Award.

A conversation between Gabriela Löffel and Aisling Rusk. We have invited Gabriela Löffel, a Swiss artist whose multi-channel video installation "Inside" explores the concept of art freeports. She will show excerpts of her work and discuss her approach and strategies to exploring investigative themes through art. 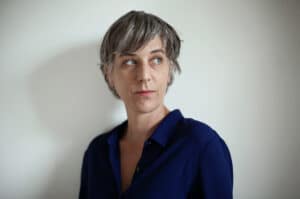