DPA without the Lawyer

This handbook is the third in the series on access to information instruments, and follows on from the Freedom of Information Act and Environmental Information Regulations (EIRs) that were completed by Request Initiative for CIJ in previous years.

The right to access your personal information, enshrined in the Data Protection Act (DPA) 1998, is a powerful tool in investigative journalism. Through a Subject Access Request (SAR), journalists can encourage their sources to access their personal information held by public authorities and private companies. This is especially helpful when verifying the claims of whistleblowers and exposing miscarriages of justice.

The Request Initiative and Centre for Investigative Journalism DPA handbook will provide clear and accurate guidance to journalists on how to make use of SARs, from making a request to the appeals process. The guide will provide a methodology and supporting resources to help produce SARs that will lead to extensive disclosures of information.

This handbook had particular resonance for the work we were doing for and with whistleblowers. Whistleblowers have been at the centre of the biggest journalistic stories in history. Daniel Ellsberg, Deep Throat, Clive Ponting, Chelsea Manning, Edward Snowden. But journalists have difficulty in verifying whistleblowers’ claims. They need hard evidence – signed and dated documentation. Imagine how many whistleblowers have had their stories all too easily dismissed due to lack of evidence?

Another of journalism’s fine traditions is exposing miscarriages of justice and the persecution of individuals by governments, law enforcement agencies and corporations. But once again, journalists are up against the difficulty of verifying claims by victims and they need access to documents in order to do so.

There is a law that provides a solution to these problems. Under the DPA, a whistleblower, a victim of miscarriages of justice or a member of the public can obtain a copy of the information held on them by a public or private organisation. All they need to do is submit a SAR, and the subsequent disclosures of official documentation can support the verification of their allegations. This is a very cheap and simple way for journalists to decide whether to pursue stories centered on claims of discrimination against sources.

Journalists can facilitate the submission of SARs by their sources if they know how the law works. And if the requesters grant permission, journalists can use this exclusive information in their stories. However, obtaining copies of personal information under DPA is not straightforward. There are exemptions where public authorities and private companies do not have to disclose the personal information they hold on an individual. If disclosing information would compromise, for example, national security, ongoing legal proceedings or matters relating to crime and taxation then disclosure is not permitted. These exemptions are often incorrectly applied but the lack of knowledge outside specialist organisations prevents requesters mounting successful appeals. 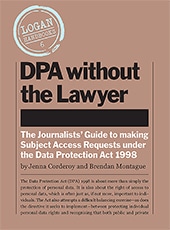